Things a Chicago local wants you to know 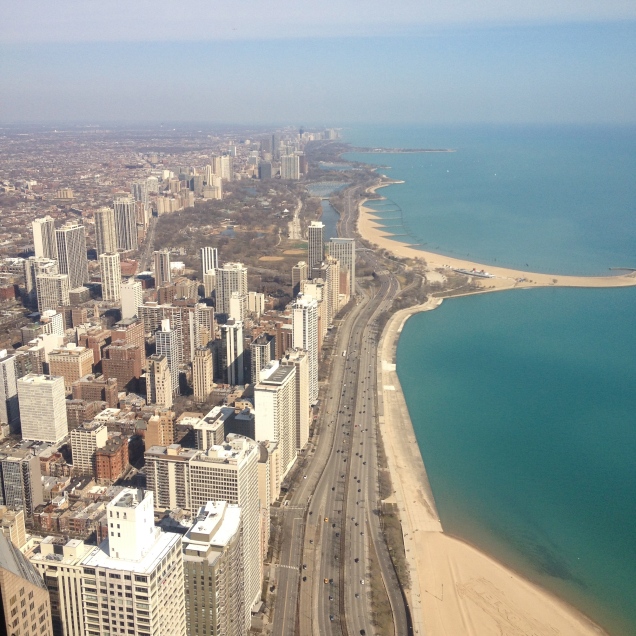 Chicago 1,000 feet from the ground, seen from the Hancock Observatory, now called 360 Chicago, located on Magnificent Mile. (Photos by @iamtanyalara)

Randy Hunt has lived in many cities in the United States. A software developer based in Chicago for Discovery Channel online, Randy and his family moved a lot throughout his childhood, “bouncing between Chicago and other places.”

“My family is all from Chicago and though I’m not a native  (he was born in Wisconsin), this has always been home to me,” he says.

Randy is also a polyglot who runs the popular blog yearlyglot.com, a language-learning site with thousands of regular readers (he believes anyone can learn any language within a year – and they don’t even have to enroll in expensive language courses). To date, he speaks about seven languages at varying levels — English, German, Polish, Russian, Italian, Spanish and Persian — some he can speak and write (Russian), others he can carry on hours-long conversations, say, about Pinocchio (Italian), the Grimm Brothers’ stories (German) or Kafka (the author wrote in German, rather than Czech), and some he can show people directions, and then sometimes it’s simply to greet and make the girl at his favorite coffee place giggle and blush (Persian).

Chicago local and software engineer Randy Hunt (yearlyglot.com) says, “Everything about this city is balanced between opposites.” (Photo by Marianka Campisi) 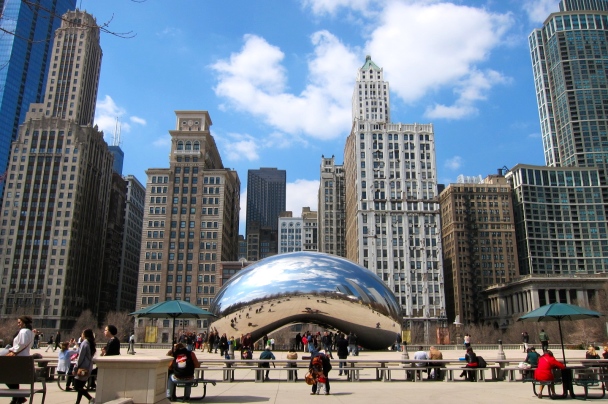 Anish Kapoor’s “Cloud Gate” (The Bean) is the centerpiece of Millennium Park.

All of which makes Chicago the perfect city for him — a city of natives, immigrants and ambition. (“There are more Polish people in Chicago than any other city in Poland except Warsaw,” he says.)

Over vodka cocktails (naturally, the European variety), Randy told me about Chicago’s duality and why Chicagoans would rather put a wet hand in a live socket than put ketchup on their hotdog.

What makes Chicago special to you personally?

Randy Hunt: What truly makes Chicago unique is that everything is a duality. Everything about this city is balanced between opposites: it’s a city with big skyscrapers, but it’s also made up of large sprawling neighborhoods. It’s the marriage of brick and stainless steel. It’s the intersection between nature and industry. You can find everything here, often just a few feet apart. I really prefer large cities and big architecture. Chicago is the birthplace of modern architecture, particularly the skyscraper (the Home Insurance building, built in 1884). I love being around the skyscrapers.

What is the quintessential Chicago experience? What are things that visitors should not miss?

Chicago is famous for its deep-dish pizza, and no one should go through life without trying it, because it’s something you won’t find anywhere else. But it’s not our best food. The best hotdogs in the world are Chicago-style dogs. We’re also well known for Italian beef sandwiches. And this is the home of the Kronos meat factory, which is the largest supplier of gyro meat in America. We’ve also got some slightly more rare items that are worth a try, like the pizza puff.

The Chicago Art Institute distinguishes itself for having some of biggest names in art through time, from the classical El Greco to Rothko, Turner and Monet.

For landmarks, obviously the Sears Tower — yes, it’s called the Willis Tower now, but Chicagoans refuse to accept the name change. It’s well recommended to wander over to Wrigley Field and get cheap tickets to a Cubs game from a scalper. Yes, it’s illegal, but the seats will be $5 instead of $100 if you buy them after the game has started. And one shouldn’t miss an opportunity to just ride the L train around and see the city.

I’m not a big fan of museums but those who are will find no shortage of interesting things to see. Definitely, the Art Institute of Chicago is a must for art lovers. And the Field Museum is great for natural history fans. But we’re also the home of Frank Lloyd Wright and Mies van der Rhoe, so there are architecture museums, too. And while I hate to perpetuate a stereotype, there are also plenty of gangster tours for people who still think of Al Capone when they think of Chicago. But truly, perhaps the two best things in Chicago that shouldn’t be missed by a visitor are our live jazz and blues clubs, and our comedy clubs. Jazz and blues have their roots in this city and they’re still alive and well. And very few comedians have hit the limelight without spending some quality time honing their skills in the Windy City.

Why is it that every time Chicagoans find out you’re visiting the city, they give you a long list of food and restaurants to try even when you’re not asking? And what’s wrong with putting ketchup on a hotdog?

Chicago is one of the best food cities in the world. In fact, Alinea, the three-star Michelin restaurant of Grant Achatz in Lincoln Park known for its deconstruction of food, was recently named the best restaurant in the world for the third year in a row. There’s a lot of great dining here and Chicagoans are quite proud of that. 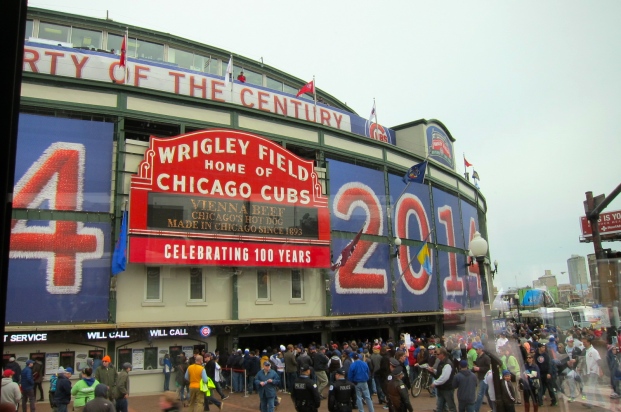 Wrigley Field, home to the Chicago Cubs, celebrated its centennial year in 2014.

The author Tanya T. Lara at Millennium Park in April 2014.

We’re also very opinionated about where to get the classic Chicago staples — pizza, hotdogs, Italian beef, etc. And the reason you don’t put ketchup on a hotdog is because it’s already got slices of real tomato. Why would you want to add some sugar-filled tomato puree?

What is your favorite place in Chicago?

I think my favorite place in Chicago would be on the river after dark. I’m always a bit more at peace when just walking along the river and seeing the city lights reflected on the water. I’ve done just about everything a person can do along the river’s edge — having dinner, reading a book, having drinks with friends, sharing a romantic moment with a girlfriend, or just walking alone and taking photos.

What are the tourist traps that visitors should avoid? I heard that nobody really goes to the Navy Pier.

Yes, locals definitely don’t go to Navy Pier. There’s really nothing there worth seeing, it’s just a name to check off on a destination list. Skip it and use that time for the city’s less obvious gems.

And don’t be that lame tourist walking around the city with a bunch of Garrett’s popcorn. Trust me, it’s just popcorn. There’s nothing particularly special about it, other than the hype.

Also, don’t wait in a long line to visit the Sears Tower. There’s no reason to spend three hours waiting for your opportunity to spend 10 minutes looking out the window. If you can see the line, it probably means there are hundreds more people ahead that you can’t see. Just leave and go back in the morning before the tour buses arrive. And if you don’t get a chance to visit the Sears Tower, you can always visit the Signature Room at the Hancock Center, which is almost the same height, and far less crowded. Plus, they have food!

One last bit of advice: there are people who insist that Malört is an integral part of the Chicago experience. Don’t be fooled. Malört is nothing other than the most disgusting liquor you will ever put in your mouth. Save yourself the torment and get a nice cocktail. 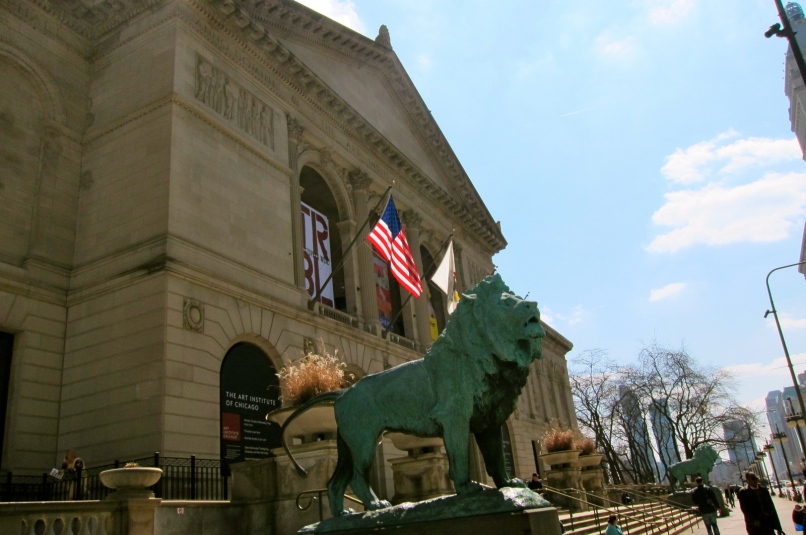 The Art Institute of Chicago. Unlike most cities that separately house the works of the old masters, and contemporary and modern art in different museums, Chicago has them all in its Art Institute — more than 300,000 works of art.

“Agora” by Magdalena Abakanowicz in Grant Park. (Photo from cityofchicago.org)

Chicago has a profusion of public art, which ones are your favorites?

I honestly don’t pay much attention to the public art — it just sort of fades into the background for me. But I do find my head turning every time I go past Agora, the collection of headless iron bodies wandering aimlessly in Grant Park. The installation is comprised of 106 nine-foot-tall torsos made of cast iron by artist Magdalena Abakanowicz, her largest installation.

What is the best and worst time of the year to visit? Is winter really that brutal every year, like the one just past where you had the polar vortex?

The birthplace of the skyscraper, Chicago is home to architects such as Mies van de Rohe and Daniel Burnham.

My friend Simon took me to the Hancock Observatory in December 2013 and told me to go to the ladies room. I said I didn’t need to. Turned out it was for the night views.

Winters here can get cold, but this year was an anomaly. A typical Chicago winter may still be much colder than a tropical person can handle, but I think the average person from a seasonal climate could survive a normal Chicago winter. Of course, the best time to visit Chicago is summer, when we have tons of street festivals, free concerts in the parks, tons of outdoor activities, and endless things to do.

How do you feel about Chicago always being compared with New York — the skyline, the architecture, the atmosphere? What does Chicago do better than New York or any other city in the world?

Chicago is the birthplace of skyscrapers. And while New York may have more, we still do it better. We also have alleys, so you never have to walk down a sidewalk littered with garbage bags, as you would find in New York. So basically, what I’m saying is, in summertime, our city looks and smells a lot better!

What are the off-the-beaten-paths that visitors should look up outside of downtown Chicago?

First thing that comes to mind is Green Mill, a late-night jazz club on the north end of the city. It’s great any time you go, but on Sunday evenings they have the “uptown poetry slam,” which is quite an experience. And even better if you start that Sunday with brunch at Fadó with live music from a traditional Irish band. Also, if you’ve brought some nice clothes, Untitled is one of the nicest classic music clubs you’ll find, set up like a speakeasy with an old-school “rat pack” feel to it.

The blues at Buddy Guy’s Legends in the South Loop.

The ornate and historic moviehouse Uptown Theatre in the Uptown neighborhood of Chicago, built in 1925, has more than 4,000 seats.

If you have a friend to take around and he/she has only 24 hours in Chicago, what would the day look like?

Assuming we start in the morning, from the hotel our first stop would be an old Chicago “greasy spoon” diner for some quick breakfast. Eggs and Polish sausage, if you want to do it right. Then off to Millennium Park to have a look at the famous “The Bean” by Anish Kapoor (officially called Cloud Gate) and the “Spitting Fountains” by Catalan artist Jaume Pensa and built by Krueck and Sexton Architects (officially called Crown Fountain).

And maybe a look at Buckingham Fountain. Then time for lunch. We’d walk up to River North and get deep-dish pizza at Pizzeria Uno. If there’s a Cubs game that day, we’d wander over to Wrigley Field and take in the atmosphere at one of the most famous sports stadiums in the world.

Then it’s not far to Kingston Mines where we could catch some Chicago blues music. After that it’s probably time to eat again, and I’d definitely suggest an Italian beef sandwich. After that, maybe back downtown to see the city lights after dark, check out the river, have a couple of drinks.

Finally, it’s off to Green Mill for late night jazz until 4 a.m. That takes you all over the city, gets you a chance to see several sights along the way, and lets you go home with a pretty good sense of what makes Chicago great.