Searching for Stalin’s Boots in Budapest 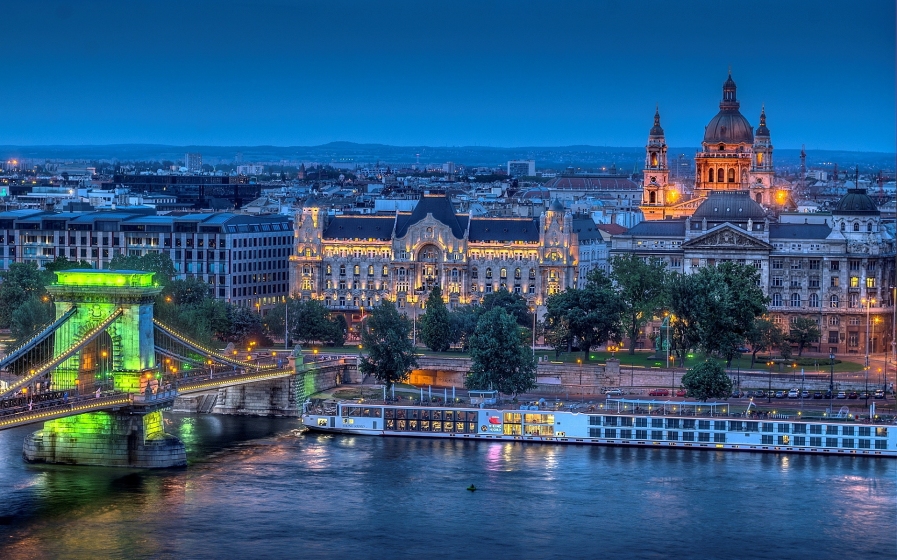 Budapest’s Chain Bridge on the Danube River — looking as blue as Strauss’ waltz at twilight — links what used to be two cities, the hilly Buda and the flat Pest. A cruise on the Danube is a great way to see the city.  (Photo from budapest4rent.net)

Unfortunately, this was the weather I arrived to in 2009 — a snowstorm. But still, I went to Statue Park (Memento Park), an hour away from Budapest, to see what I came here for: Stalin’s Boots and other Cold War monuments.

In 1956, about 200,000 Hungarian students and citizens demonstrated in Budapest to sympathize with the Poles, who had just won political reforms from their communist government and the Soviet Union.

The Hungarians wanted reforms, too, and one of their sixteen demands was the dismantling of Joseph Stalin’s monument in a park in Budapest, installed just seven years earlier, ostensibly a gift from the Hungarian people to the Soviet leader.

The statue was eight meters high and stood on a base of four meters tall. Thousands of angry Hungarians chanting “Russia, go home!” toppled the statue, which broke into several sections.

What was left on the limestone base were the boots, over which the revolutionaries draped the Hungarian flag.

Fast forward to fifty-three years later, in 2009, and I was  in search of this remnant of Hungary’s October Revolution, the surviving piece of this sculpture now known as “Stalin’s Boots.”

I couldn’t have picked a worse time to do it.

The boots from Soviet leader Joseph Stalin’s Monument, which was toppled by Hungarian revolutionaries in 1956. And Vladimir Lenin, one of the dozens of communist monuments at Memento Park or  Statue Park.  (Photos by @iamtanyalara)

A giant replica of Stalin’s Boots in the indoor museum.

People go abroad to shop, to eat, to visit museums and landmarks. I do that, too.

But on two occasions, I’ve traveled abroad primarily to see statues. One was to Savannah, Georgia to look at the Bird Girl statue, which I first saw in the movie Midnight in the Garden of Good and Evil and which used to be installed on a gravesite in  Bonaventure Cemetery.

And the other time was this — in Budapest for Stalin’s Boots.

My fascination with the Cold War began when I was a kid reading espionage novels. My head was filled with the sufferings of revolutionaries, spies who fall in love, heart-stopping border crossings, and betrayals.

Later, when I was already working and whenever I had saved just enough,  I would go to countries in the former Eastern Bloc. The Berlin Wall came down when I was still in journalism school, and countries that I used to read about in fiction started to open up, and I followed every piece of news about this sea of change sweeping across Eastern Europe. 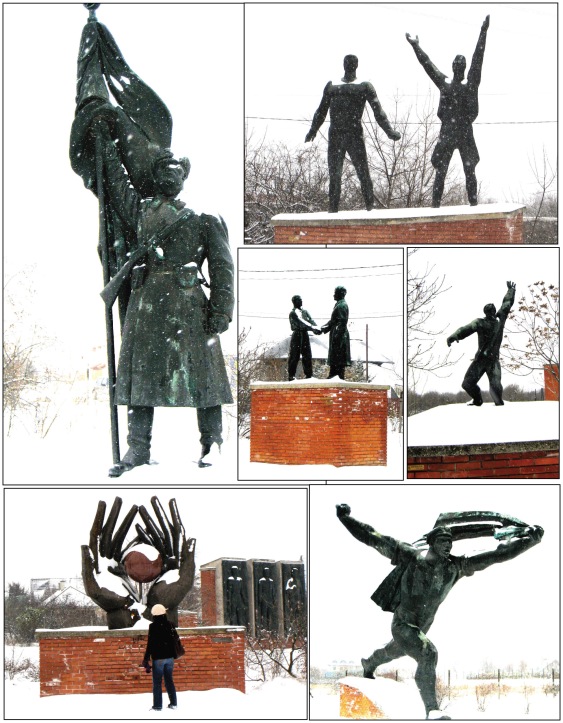 During the Cold War, there was very little distinction between art and communist propaganda. After the Berlin Wall came down, and communism along with it,  other countries destroyed their monuments. Hungary scooped them all up and put them in an outdoor museum — outside Budapest.

Hungary was one of those countries. The cheapest way to get from Manila to Europe was — and still is — during winter abroad. It’s also the time when the newsroom is quiet after the Christmas rush and it’s easier to take time off from work.

So there I was in Budapest, which was in the middle of an unexpected snowstorm, in February 2009.

More than a decade before I went to Hungary, I saw a show called Lonely Planet. It wasn’t even a channel then, it was just a show (later called Globe Trekkers) on Discovery Channel hosted by a gap-toothed British guy named Ian Wright, who ate yak brains in Mongolia or something gross like that (long before Anthony Bourdain started doing such things).

In his Budapest episode, he went outside the city to Statue Park (or Memento Park), where Hungary put together all its communist-era statuary. Unlike other newly democratized countries that destroyed theirs, Hungary had the good sense to gather them in one park.

Except, even decades later, this outdoor museum was still not as popular as it should have been. Not a lot of tourists knew  about it or cared to visit it.

I don’t remember anything else about that episode except for Statue Park. He showed Stalin’s Boots — the actual ones from the statue that was toppled in 1956 — and the giant plaster cast in the dark indoor museum. There were also several statues of Lenin and generic communist propaganda in the park. 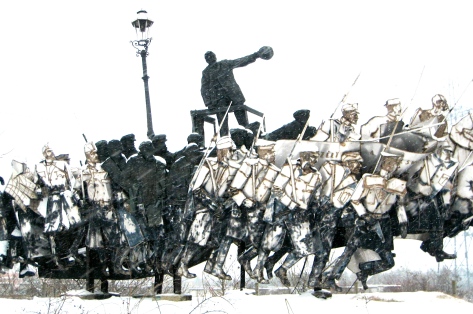 How different the world was before communism failed miserably. And so many people suffered and died because of it.

And then Wright made me laugh my ass off. He pointed to a giant statue of a man running and holding a piece of cloth that could have been a flag…or a towel.

Wright said something like this bloke seems to be yelling, “Your towel, your towel! You dropped your towel!”

Budapest had me at towel.

I arrived in Hungary after a night in Zurich (there were no direct flights from Manila). And in booking this trip I found a secret to traveling between European countries — always take the poorer country’s airline even if they are code-sharing.

Between Swiss Air and Malév, the Hungarian flag carrier was so much cheaper. I would experience this many other times later, like between Dusseldorf and Prague (Czech Airlines — cheaper than Lufthansa!) or Amsterdam and Rome. 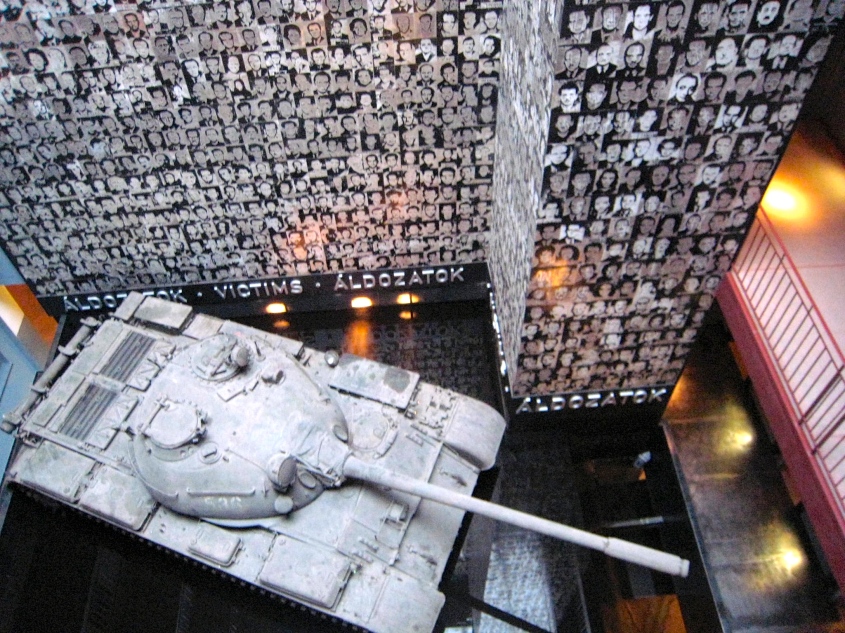 The House of  Terror or Terror Museum on Andrassy üt, an avenue that is often compared with Paris’ Champs Elysées, is a repository of how Hungary’s Secret Police terrorized and victimized its own citizens. The tank is both a symbol of the Soviet Union’s power during the Cold War and the Eastern Bloc countries’ suppression of their people’s freedoms — and on the wall are pictures of the dead and disappeared.

Day and night, people come to light candles and lay flowers for the fallen on a narrow ledge outside the Terror Museum.

Teletypes, interrogation rooms, cells and uniforms of the Secret Police are among the mementos in Terror Museum.

There was an unexpected snowstorm in Budapest when I arrived.

My hotel was only three blocks from the Danube River, which was partially frozen, but I persisted on walking to Buda through the beautiful Chain Bridge and then quickly sought shelter in a museum.

So I discovered Budapest through its classical art and contemporary museums.

I went to four of them in the next several days in between hopping on and off the red tourist buses, to places like the Castle District, the gorgeous Parliament House, the Gresham Palace, Vasarcsarnok or the Great Market Hall, St. Rita’s Church and other sights.

But it was the museums that quickly became my shelter from the weather, like the National Gallery located in one section of Buda Castle, the National Museum of Fine Arts on the flat Pest side at Heroes Square, and the Terror Museum, which details the Hungarian people’s suffering in the hands of their Secret Police and the Soviet Union.

Terror Museum is located on Andrassy üt, kind of like Paris’ Champs Elyseés. This comparison carries throughout the two capitals, as Budapest is dubbed “the Paris of the East.” This beautiful avenue is topped by Heroes’ Square with statuary of royals and leaders past, its kings, rulers from its seven ethnic tribes and their horses.

Unlike Champs Elyseés, Andrassy Avenue is not bursting with shops. Instead, you find here private villas, some of them now high-end restaurants and coffee shops.

It seems a sign of how the world has changed drastically post-communism, that on an avenue where there was once a prison and torture chambers for those who opposed the communist ideology and a government largely controlled and influenced by the Soviet Union, there is now a Gloria Jeans coffee shop.

Hungarians still remember those times. Outside the musem, on every freezing night that I walked past it, people were lighting candles and leaving flowers on a narrow ledge for the fallen.

Roof outside the museum; and a section paying tribute to the priests that were persecuted and killed, accused of  inciting the peasants to rebellion.

Heroes Square has statues of the country’s Seven Chieftains of the Magyars (or the Seven Tribes of Hungary), other national leaders and the Tomb of the Unknown Soldier. (Photo from all-free-photos.com)

It was colder than it looks, so I said, “Dear Weather, my name is Tanya Lara and I am here for the first time! Please let me enjoy Budapest without a snowstorm!” Behind me, at Heroes Square,  is the National Museum of Fine Arts.

They did it perhaps for family members or friends — or for the unknown people who were murdered and disappeared. It wasn’t only the intellectuals or students that suffered this fate, there were also priests and peasants who spoke out and were accused of treason and sedition.

How could such an ideology founded on equality and love of country be so brutal and inhuman? The answer is simple: the most egregious sin and ultimate failing of communism is that it took out human emotions and needs out of the equation, and then enforced its own beliefs. Just like most religions do today.

Inside the museum, where taking pictures is not allowed (I did manage to snap a few grainy ones), the victims’ pictures are stuck on the wall, from the floor to the ceiling across three or four levels, along with a Soviet tank on the ground floor, uniforms of the Secret Police, teletypes, paintings, mock dossiers and interrogation rooms.

In the basement are the prison cells and some are literally no bigger than a cupboard for solitary confinement. These cold stonewalls tell the story of Hungary’s struggle and heartache, of dissidents and their families who grieved. I walked these halls and rooms, thinking, some of them are still grieving to this day, searching for closure.

Castle Hill on the Buda side of the city. (Photo by Kitsune Misao/wikipedia.com)

In spring and summer, tourist boats ply the Danube with live music; a marathon starts on the Chain Bridge and goes around both sides of the river, one I had wanted to do before I quit running.

It is a bustling, modern city of cafes, business and commerce that I want to go back to — but not in winter again. I want to see it when it comes to life as any city living in the present and looking at the future.

And yet…all of us are really just drifting on memories — and what is art if not for that?

Thinking about those days in Budapest, I realize that I was fortunate to be forced by the weather to take part in its remembrance of an era thankfully gone.

This painful, Cold War past, not its older, glorious royal past, but the one that still touches personally some of its citizens in their everyday lives. When they pause in the morning while pouring coffee and their hearts stop for a second or two, or when they walk home alone at night, and they are suddenly taken back to the past, by the remembrance of someone who by every right should be there but isn’t.

Budapest’s Great Market Hall or Central Market Hall i the largest and oldest indoor market in the city.