Waking up to the Ottoman Empire at Çiragan Palace Kempinski

Nobel laureate for literature Orhan Pamuk wrote his memoir Istanbul: Memories of a City shrouded in melancholy. The Bosphorus Strait, he said, is a reminder “of the difference between one’s own wretched life and the happy triumphs of the past.”

That’s a little harsh, but it’s true that you can be walking in Istanbul’s historic streets and imagine yourself in the rich past of the Ottoman Empire and in the next block be jolted back to the reality of its modernity with hip coffee shops on both sides of the strait, gleaming shopping malls, and office towers.

Istanbul—a city where I’ve made friends and visited about 15 times in the past three years (sometimes just for the weekend when I’m coming from another city in Europe, sometimes for my annual vacation and then I head to Turkey’s coastline)—is a place I’ve come to regard like a second home. A friend calls me yenge (sister-in-law) as if I were married to the city, while another tells me that I should be granted honorary citizenship.

Two beloved landmarks in this image — the historic gate of Ciragan Palace against the Bosphorus Bridge.

As with any first-time tourist to Istanbul, you go to where all the guidebooks tell you: the Blue Mosque, Grand Bazaar, Hagia Sofia, Topkapi and Dolmabahçe Palaces, Galata Tower, Maiden’s Tower, Eminonu and the Bosphorus Strait.

I did all that, but it was only when I set out on a tour of the Bosphorus that I fell in love with Istanbul. This strait that divides the city between Europe and Asia lends it romance the way the River Seine does to Paris, but in an entirely different way.

“To be able to see the Bosphorus, even from afar—for İstanbuller, this is a matter of spiritual import that may explain why windows looking out onto the sea are like the mihrabs in mosques, the altars in Christian churches, and the tevans in synagogues, and why all the chairs, sofas, and dining tables in our Bosphorus-facing sitting rooms are arranged to face the view,” Pamuk wrote.

The elegant structure of Ciragan Palace Kempinski on the Bosphorus — always a highlight on boat tours on the waters of Istanbul.

On that first Bosphorus tour, the guide pointed out the palaces of the sultans, the magnificent Topkapi and Dolmabahçe, which served as centers of the Ottoman Empire and are museums today. You can look at the bedrooms of the sultans and their collections but you cannot touch them or stay long because there is always a long queue behind you.

Then something caught my eye near the first Bosphorus Bridge. It was Çiragan Palace sitting on the shores, looking so magnificent—as if every marble column and gate rose out of the bottom of the waters of the Bosphorus fully constructed.

The palace was built by Sultan Abdülâziz and designed by the era’s famous Armenian palace architect Nigogayos Balyan and constructed by his sons between 1863 and 1867. Before that, it was known as Kazancioglu Gardens at the beginning of the 17th century and a hundred years later, in 1719, Damat İbrahim Pasha of Nevşehir built a summer mansion for his wife, the daughter of a sultan. 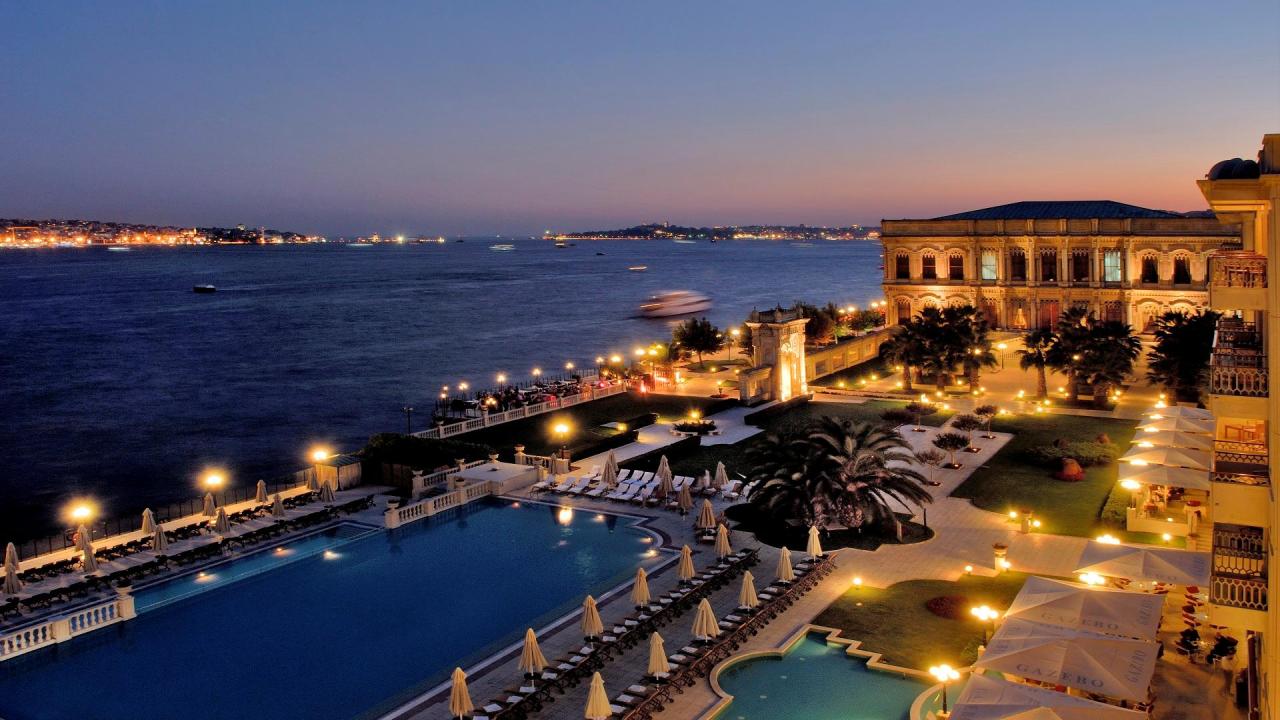 Even in winter, guests take a dip in the heated outdoor pool of Ciragan, the only swimming pool in the city that remains open in the cold months.

The guide said, “The palace is now Çiragan Palace Kempinski, the most luxurious and expensive hotel in Istanbul. Its Sultan Suite costs about 33,000 euros a night.”

I thought, surely, that amount cannot be right—but it is.

The guide continued, “But superior rooms are affordable starting at 300 euros.”

And that was how, on my third time to celebrate the New Year in Istanbul, I found myself in this Ottoman Empire palace hotel—and I definitely did not book the Sultan’s Suite.

The Kempinski brand assures luxury and white-glove service— whether it’s a modern hotel such as Siam in Bangkok or a certain architecture, like the Selcuk-style The Dome in Belek—but more than that, I loved the idea of waking up, literally, to history. In Çiragan Palace Kempinski’s case, a faithfully reconstructed history.

The elegant atrium in the palace side of the hotel. Ciragan Palace Kempinski is the choice for Turkey’s most expensive and high-profile weddings.

Çiragan Palace was built during a period wherein all Ottoman sultans constructed their own palaces rather than using those before them. It is the last example of this period of extravagance. The inner walls and the roof were made of wood, the outer walls of colorful marble and a very high garden wall protected the palace from the outer world.

Sultan Abdülâziz did not live long in his palace. He was dethroned and succeeded by his nephew, whose reign lasted 93 days and lived here under house arrest until his death in August 1904.

Then the palace was used by the parliament until a great fire destroyed it in 1910 leaving only the outer walls intact and it lay abandoned for decades. Its third incarnation was as a football stadium.

The grandeur of the Ottoman Empire lives on at Ciragan Palace Kempinski.

And finally, in 1992, the Kempinski Group restored Çiragan Palace. Stones found still lying in the palace gardens through the years served as models for the master stonemasons to recreate the intricate latticework and marble colonnades by hand.

A mid-rise modern building was added (that’s where the affordable rooms come in!) and today it has 313 rooms, including 20 suites in the hotel, and 11 suites in the historical palace.

I am told this amazing history by two lovely and sweet women, Ciaran Palace Kempinski’s director of public relations Neslihan Şen and her assistant Cansu Baş.

“It feels very special to be working here,” Neslihan says. “Apart from the Kempinski brand, you’re looking after a Turkish heritage that means a lot to everyone. It’s a lot of responsibility because it really is the only Ottoman Imperial Palace and hotel on the Bosphorus. And it’s a lot of fun because celebrities hold their weddings and celebrations at the historical palace.”

There’s nothing better than an outdoor meal during the warm months in Istanbul. Bosphorus Grill as the sun goes down.

We are having tea at Laledan restaurant, which is famous in Istanbul for its Sunday brunch, overlooking the infinity pool and the Bosphorus. The hotel’s pool is famous as well—it’s the only outdoor heated pool in Istanbul and they tell me that in winter some guests come here, quickly disrobe and jump into the warm pool—while it’s snowing.

Cansu takes me on a tour of the historical palace, which is connected to the hotel via a walkway filled with pictures detailing its history.

I’ve seen and written about presidential suites before, but nothing quite like the Sultan’s Suite. The centerpiece here is the lobby with its grand chandelier and staircase, a favorite place of brides and for pictorials apart from the terrace facing the Bosphorus.

Ever wondered how the sultans lived? The hotel’s 400-sqm. Sultan Suite—at 35,000 euros a night—gives you insights into that with the plush and elegant furnishings.

The master bedroom’s bathroom has a hamam (Turkish bath) with a private steam room and rain shower, and gold-plated and crystal bathtub fixtures.

And then there’s the two-bedroom Sultan’s Suite. At 400 square meters, it’s one of the largest suites in Europe and certainly one of the most expensive. The furniture and accessories in the room date back to the 19th century; they sit side by side with state-of-the-art technology.

The master bedroom has a marble hamam and a Turkish bath with a private steam room, rainshower and bathtub with gold-plated and crystal fixtures. The guest bedroom also has its own bathroom with a specially designed bathtub and a large window overlooking the historical peninsula.

Chandeliers, columns, replicas of paintings from the famous palace painter Fausto Zonaro, floor-to-ceiling windows and views of the Bosphorus and classical Ottoman architecture all recreate the grandeur of the Ottoman Empire.

If that wasn’t enough, Çiragan Palace Kempinski is the only hotel on the Bosphorus reachable by car, yacht or helicopter and guests of the suite enjoy complimentary transfer to and from the airport—by land, sea or air. The historical hamam in the palace side of the hotel.

The private hamam or Turkish bath.

Royalty, heads of state and celebrities have all stayed in the sultan suite, which has received numerous awards including the World’s Most Luxurious Hotel Suite and the Most Opulent Hotel Room.

Walking back to the hotel side, Cansu tells me, “My dear Tanya, you are very special because you are the last guest for the year that I have taken on a tour at the palace.” (What did I tell you about Turkish women? They’re so lovely!)

Back in my room, I do what Pamuk wrote about the chairs facing the water. It is a new year and the past 12 months have been difficult for this country with terror attacks, but I have never seen its people bow even when the city bends momentarily.

I am sitting on the balcony and looking at the Bosphorus Bridge outlined in red lights that perforate the dark sky. I have looked at Istanbul in a million ways, in all the seasons, under all circumstances, and I have loved it in each.

We spent New Year’s Eve at Le Fumoir, warming ourselves by the fire and with wonderful cocktails.

I will never tire of these waters, this view, this bridge.